skip to main | skip to sidebar

eye of the storm

Doing what it takes to survive while ultimately thriving in what I pursue. Never satisfied, always moving forward in a constant search for that beautiful state of bliss. Climbing mountains and letting shit go, washing it all away in the mountain streams. Simplifying and becoming mobile. Such a simple concept yet requires more effort and resources than one could imagine. Expanding upward and outward, when in doubt, climb higher. On the path of chasing the dream and in constant pursuit of happiness, not sacrificing or giving up when it's not around the next bend. Head high, chasing the sunshine and outrunning the storm. In the middle of every storm is the ultimate calm and that is what I am after.
Posted by 'e' at 6:00 AM No comments:

Sometimes you just have to HTFU and realize you are just being a pussy. Complacency, such an interesting word and how we often just get in our little groove and don't push our limits or like to be put outside of our comfort zones. It would appear as though I have been in this place for the last several years. Content with my world and not super worried about pushing on and trying to excel in other areas. This has all been flipped upside down this summer and I am actually loving it. Embracing the change, the hurt, the discomfort, the lack of conveniences. Toed the line for the Vapor Trail on Saturday night. Started off shitty as i had planned on riding a bike with a front fork but as I was dialing it in I noticed a broken seatpost, with no replacement part to be had, I pulled the wolfhound off the rack. My favorite whip, by far, but I had only been on the rigid bike twice since I broke my hand in June. Turned out to be a beautiful and insightful way of looking at who I am. It's ok to hurt, to struggle. Then out of the hurt and struggle the beauty manifests. My hands have never hurt so bad on a ride in all my life and I just rolled on, pushed through intense knee discomfort and realized it was all spectacular. Nothing causing damage, just some little noises for my body to absorb. These little manifestations are so needed for my mindset, for the pursuit of happiness. The ride was awesome, 125 miles and I'll definitely be toeing the line next year. It's not a race, just a ride that makes me smile. Some are fast, some are not, but it doesn't really matter. For a little recovery day I ran up Mt. Massive. Seemed like a good idea, it was pouring rain so wrapped up in my RAB rain gear and headed up with the black and white. The rain turned to snow, the wind howling at 60-70mph and the snow covering my shoes. Continued up the ridge to a site of extreme beauty. Dark grey skies, snow capped mountains, fresh tracks, happy Madderz and then raced back to the bottom. There's no such thing as bad weather, just bad gear. The last two weeks or so have been spectacular. Ive been chasing an alpine fish around CO, running, riding, eating amazing food and digging the vagabond life. Many things are changing. A move on the horizon, new activities abound, a new style of clinic. Embracing the change, enjoying my surroundings as this is not where I will be for long. 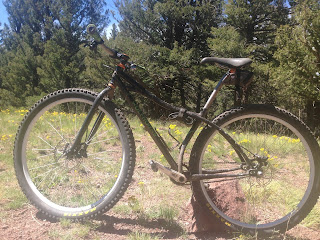 Rising from the Ashes

So many years without a word, yet so many things are still the same. Mountains, bicycles, sunshine, snow, smiles are still what brings a smile to my face. Constantly evolving, moving forward chasing and living the dream. No matter the time or place, nothing really changes. The desires are still there and the dreams are still prevalent, ever changing yet never really changing. 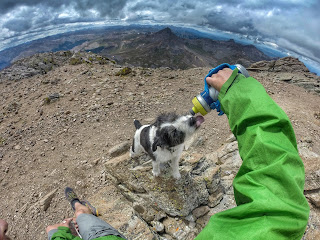 Miss Madolin still keeping me on my toes even though she has slowed down immensely. Has been such a fun critter of the last 8 years. Different year, same objectives. Vapor Trail tomorrow, just go pedal, no objectives or real desires other than to smile and enjoy the ride. Many thoughts to be added but just a few quick words to initiate the process. e
Posted by 'e' at 7:49 AM No comments:

Haven't written anything in a while as I haven't had the urge to write anything about my play time. Until this weekend that is. Had the opportunity to do the Vapor Trail 125 and jumped on it. I have wanted to do this for awhile but it never quite worked out. Not going into all the details as others do better write ups, but here is what it is. 10pm start time in Salida, 125 miles and 20,000' of elevation gain. I have done a lot of high country and all night rides but this one was extraordinary! Amazing singletrack, long steady climbs, hiking to 13,000' feet under the stars only to descend a killer rock garden for miles followed by an amazingly fast pump track-ish section. And that was all before daylight! Followed by a mellow climb to the top of Monarch Pass for the Crest trail with a little detour down starvation creek where the leaves were changing colors and had fun chunk of trail. Back up to Marshall Pass, finish the crest by descending silver creek and then flowing along the rainbow trail with a quick spin back to Salida. Finished at 3:31 for a total ride time of 16 hours and 31 minutes. The most fun I have had on a bike in years, will definitely be back for this one again. A few errors along the way but nothing to crazy and best of all the body felt awesome, even though it was an off the couch ride. No training of any sort went into this, unless you count hiking the fat bike up some 14ers and doing ridge top rides. It's been a good summer of just having fun. Leave Friday for the WV Fall Tour. It's gonna be six days of bikepacking with a bunch of buddies from across the country. I may even take a picture and write a little about it. peace

has been going on. Sent the wolfhound off for reinforcement, so picked up this as a temporary fix

the carbon fork is so much sweeter than I would have ever thought.

Just got a pic of the wolfie with her new look and she is on her way to Leadville.....notice the new sex tube gusset?

And yeah, the tdi is sweeeeeeet!

Spring is here, camping and riding weekends have arrived and I am digging it. Fruita two weeks ago BV last weekend and probably salida this weekend. Pedaling the fattie on dry trails is waaay more fun than you would think. Point it and trust it is the theme when going downhill or through the tech. Too much fun!

Photo credit to spike!!, it was cool running into you out in the desert!

with the black & white 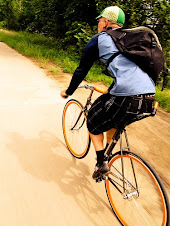 this is where I may be